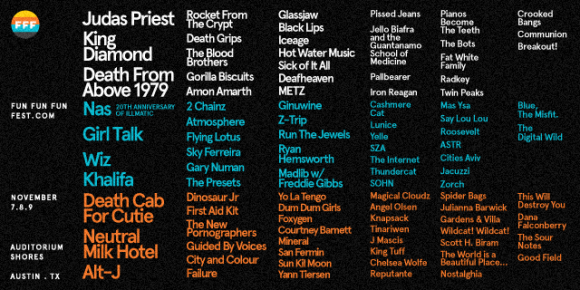 The 9th annual Fun Fun Fun Fest (FFF, F3F) in Austin, Texas is right around the corner and that means it is now time to get start getting stoked for everything this year will have to offer, (assuming your stokage hasn’t yet begun.)

Like ACL and SXSW, FFF also has a cool abbreviation. But for those who have yet to experience a FFF, the amenities and entertainment are, at times, staunchly different from the other well-known festivals in Austin. As one of my friends so elegantly put it, FunFunFun is a “less cluster-fucky ACL with better music and beer, and skateboarding.” So really, what’s not to be excited about? Here are just a few things you should know about F3F 2014:

But with all of this excitement to see, how can one possibly manage to get a full FFF experience!? Chill. Allow me to offer some perspective. Below is a short list of my FFF “must-sees” and small explanations as to why.

To be honest, my “must-see” list includes about 50 artists/bands. Consider the above as a backbone for any and all FFF attendees. Even if the music isn’t enough to shiver your timbers, events like the Air Sex Championship and Live Action Battle Rap (plot twist: definitely not what you think it is) are enough reanimate the dead.

To put it bluntly, you’d have to be Hellen Keller in a hazmat suit to find yourself not enjoying this year’s FunFunFun Fest.

You can listen to a Spotify playlist put together by FunFunFun Fest here to introduce yourself to some of the bands you might not know, and make sure you’re properly prepared for the ones you do know

Also, you can check out (and follow) my personal playlist updated on the weekly. No rules, just 13 tracks guaranteed to tickle your hear-holes in a good way: The Weekly Dyl