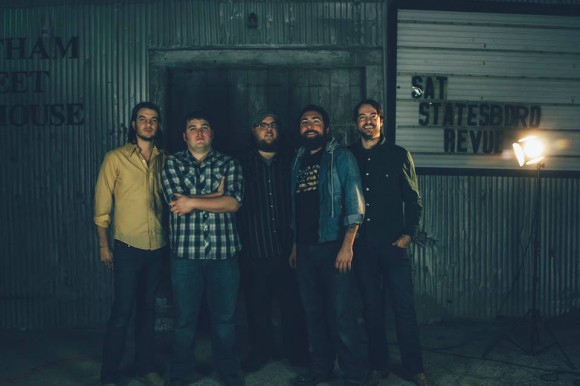 If we’re honest, the true weight of any band or artist is chiefly determined by how they translate to us in a live performance setting. Can they breach that intangible border between the stage and the gathered onlookers? Can they slip in like a steady rising state of inebriation, stealing our attention, controlling our emotions and ultimately drawing us into their world? Does their energy continue to vibrate within us well after the last chords have been played and our daily life comes to reclaim us? These are probably some of the questions one writer from Rolling Stone had running through his head before he proclaimed Statesboro Revue as one of the highlights of the 2009 South by Southwest Conference and Festival. Statesboro Revue goes back to 2008, but the evolving vision of front man and primary songwriter Stewart Mann goes back much further. It’s a journey down many roads from Texas to Tennessee to California and back, all in a search for that perfect, unspoiled place for his music to grow roots. Year after year in city after city, it became clear that those roots had taken hold on stage and from there grew into a groove oriented, old school rock and roll band, the likes of which have not been seen in quite some time.

Never being afraid to aim high,  Statesboro Revue released their debut album Different Kind of Light produced by Grammy-winning David Z (Prince, Jonny Lang, Buddy Guy, Govt Mule) in 2009. Hitting the Texas Music Chart with two Top 20 singles, the blues rock effort quickly drew a dedicated fan base to their stages, but this was just a prelude to the tour de force that is their album Ramble on Privilege Creek,  released in April 2013. Described by Mann as earthier with catchier hooks, this new music is pure living energy that winds through light and lofty atmospheres down through the depths of sweet Celtic miseries and over to angry growls through clenched teeth, all without ever losing that gypsy pulsation that is the very definition of rock and roll. “This album is extremely broad in subject matter and style, in musicality and production, and I couldn’t be happier about it. I’ve always strived to create a sound that doesn’t try to reinvent the wheel; merely merge the little idiosyncrasies of all my influences and shape them in a manner that might someday be looked upon as my own unique sound. I think this record is as close as I have ever been to accomplishing that goal.”

Reminiscent of singers from decades past, Stewart Mann’s soulful voice is both evident and familiar. His seasoned timbre is well-worn but polished enough to have landed him the starring role in Buddy: The Buddy Holly Story at the historic Cameo Theatre in San Antonio, Texas. Joining Stewart is younger brother Garrett Mann, the lead guitar player who holds down the fort, then lets loose when the song calls for it. On bass guitar is Musicians Institute alumnus Ben Bradshaw, providing backbone and foundation, all while mixing in melodic leads and runs that only a player of his experience can muster. Drummer Kris Schoen’s ability to both drive the tunes and lay down a lazy snare for the slow groove furthers the dancing frenzy that ensues at a Statesboro Revue show. The all-star list of shared stages more than hints that this all-inclusive working band is truly worth their weight. The Statesboro Revue has played with the Los Lonely Boys, The Wailers, the Allman Brothers Band, Cross Canadian Ragweed, Whiskey Myers, Dirty River Boys, Willie Nelson, Charlie Robison, Ryan Bingham, Reckless Kelly, Turnpike Troubadours, Randy Rogers Band, Bob Schneider, War, Arrested Development, Eli Young Band, Marshall Tucker Band, The Fabulous Thunderbirds and Will Hoge.

With an ethereal blend of guitar and keys, a propelling bass line and split-stage percussion, The Cover Letter boasts an enthralling and compelling sound.

Formed in 2013, the band draws parallels from early Fleetwood Mac, Arcade Fire, and Edward Sharpe and The Magnetic Zeros while melodically gritty lead vocals offer a soothing and rugged edge to their expressive music. These musicians showcase their versatility by playing multiple instruments on stage.

With a live show that’s never static, the band members seamlessly swap their instruments, leaving the audience with a unique and diverse experience.

The Cover Letter released their self-titled EP in early February.

Listen to our Statesboro Revue & The Cover Letter playlist on Spotify now!